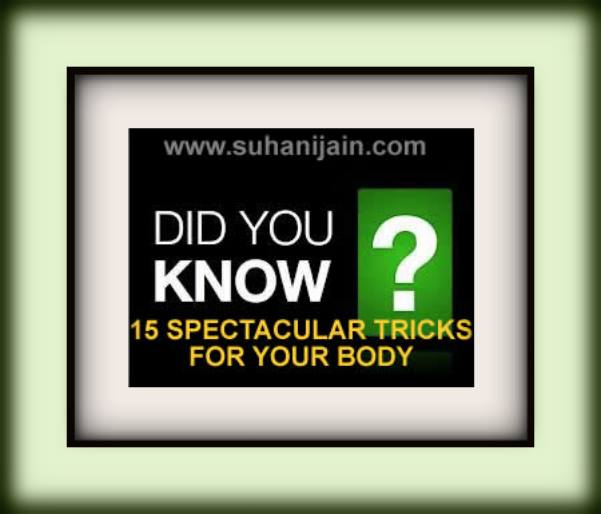 15 SPECTACULAR TRICKS FOR YOUR BODY !!!!

1.) If you’ve got an itch in your throat, scratch your ear. When the
nerves in the ear get stimulated, they create a reflex in the throat
that causes a muscle spasm, which cures the itch.

3.) If you need to relieve yourself BADLY, but you’re not anywhere
near a bathroom, fantasize about RELATIONS. That preoccupies your brain and distracts it.

4.) Next time the doctor’s going to give you an injection, COUGH as
the needle is going in. The cough raises the level of pressure in your
spinal canal, which limits the pain sensation as it tries to travel to
your brain.

5.) Clear a stuffed nose or relieve sinus pressure by pushing your
tongue against the roof of your mouth then pressing a finger between
your eyebrows. Repeat that for 20 seconds it causes the vomer bone
to rock, which loosens your congestion and clears you up.

6.) If you ate a big meal and you’re feeling full as you go to sleep,
lay on your left side. That’ll keep you from suffering from acid reflux it keeps your stomach lower than your esophagus, which will helps
keep stomach acid from sliding up your throat.

7.) You can stop a toothache by rubbing ice on the back of your
hand, on the webbed area between your thumb and index finger.
The nerve pathways there stimulate a part of the brain that blocks
pain signals from your mouth.

9.) Stop a nose bleed by putting some cotton on your upper gums right behind the small dent below your nose and press against it hard. Most of the bleeding comes from the cartilage wall that divides the nose, so pressing there helps get it to stop.

11.) Need to breathe underwater for a while Instead of taking a huge breath, HYPERVENTILATE before you go under, by taking a bunch of short breaths. That’ll trick your brain into thinking it has more oxygen, and buy you about 10 extra seconds.

14.) Finally, this one’s totally USELESS, but a nice trick. Have someone stick their arm out to the side, straight, palm down. Press down on his wrist with two fingers. He’ll resist, and his arm will stay horizontal. Then, have him put his foot on a surface that’s half an inch off the ground, like a stack of magazines, and do the trick again. Because his spine position is thrown off, his arm will fall right to his side, no matter how much he tries to resist.

15.) Got the hiccups Press thumb and second finger over your
eyebrows until the hiccups are over – usually, in a short while. 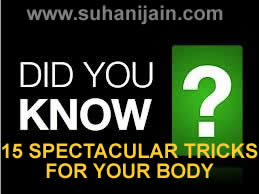