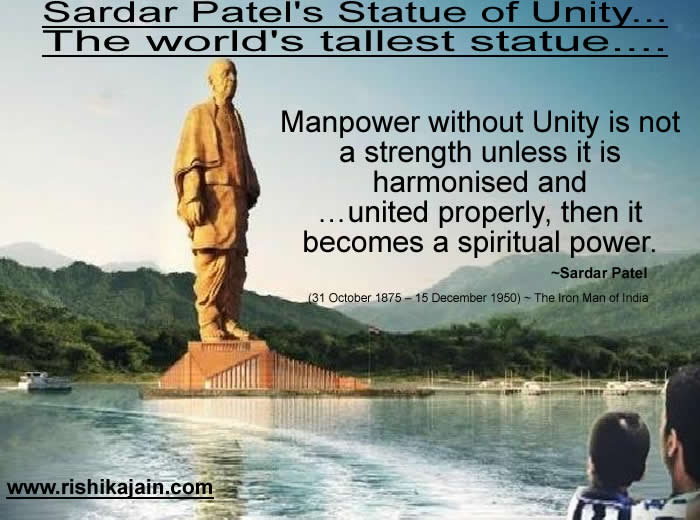 At 182 metres, the statue will measure twice the height of the Statue of Liberty and nine times that of the Angel of the North. It will be more than 50 metres taller than China’s Spring Temple Buddha, the world’s current record holder, at 128 metres

Construction of the statue, which the government pegs to be the world’s largest statue, was completed at a record time of 33 months. PMNarendra  Modi had laid the foundation stone for the project on 31 October 2013 when he was the Chief Minister of Gujarat.

Sardar Patel was an Indian barrister and statesman, and one of the founding fathers of the Republic of India. Hailed as the Iron Man of India, he is also remembered as the “Patron Saint” of India’s civil servants for establishing modern all-India services.

Patel was also one of the earliest proponents of property rights and free enterprise in India.

Post Independence, Patel took charge of the task to forge a united India. Using frank diplomacy, Patel’s leadership persuaded almost every princely state which did not have a Muslim majority to accede to India. He is rightly called the maker of United India.

Here are some noble thoughts from Sardar Patel, One of India’s Greatest Leader….

It is the prime responsibility of every citizen to feel that his country
…is free and to defend its freedom is his duty.

My only desire is that India should be a good producer and no one
…should be hungry, shedding tears for food in the country.

Even if we lose the wealth of thousands, and our life is sacrificed, we
…should keep smiling and be cheerful keeping our faith in God and Truth.

Manpower without Unity is not a strength unless it is harmonised and
…united properly, then it becomes a spiritual power.

Every citizen of India must remember that
…he is an Indian and he has every right in this country but with certain
…duties.