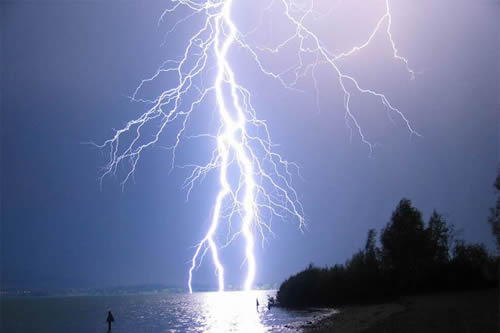 1. Every year, the Earth experiences an average of 2.5 crore lightning strikes during some 100,000 thunderstorms. That’s more than a hundred lightning bolts per second.

4. The energy contained in a single lightning strike can power a 100 Watt light bulb for 90 days.

5. Trees sometimes can take direct hits from lightning and not get burnt – the electricity passes over their wet surface and goes straight into the ground.

6. Glass forms when lightning strikes into sandy soil. After a storm you can find strips of glass in the sand.

7. If you have wet clothes on, lightning will do you less harm.

8. In March of 1991 a single six-hour storm stretching over Iowa, Illinois, Wisconsin, and Missouri caused more than 15,000 lightning strikes. During the storm the skies were ablaze with almost constant lightning.

9. “Lightning never strikes twice” unfortunately is a myth. Lightning can strike the same location many times.

12. The irrational fear of lightning is known as KERAUNOPHOBIA. The fear of thunder is termed BRONTOPHOBIA.

13. The state of Florida holds the title of the “Deadliest State.” There are twice as many lightning casualties as in any other state.

15. Never talk on the phone while a storm is breaking outside. Not only do cell phones “attract” lightning, but about 1% of all lightning deaths in the U.S. are a result of people talking inside the home on a corded phone during a thunderstorm.

16. About 71% of all people struck by lightning survive. The fatal cases are usually the result of cardiac arrest. However, those who survive often suffer from serious health and psychological problems like loss of memory or sensitivity, insomnia, impaired hearing, or constant pain