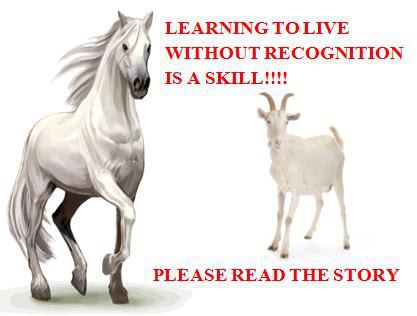 There was a farmer who had a horse and a goat…..One day, the horse became ill and he called the veterinarian, who said: – Well, your horse has a virus. He must take this medicine for three days. I’ll come back on the 3rd day and if he’s not better, we’re going to have to put him down.

Nearby, the goat listened closely to their conversation. The next day, they gave him the medicine and left. The goat approached the horse and said: – Be strong, my friend.
Get up or else they’re going to put you to sleep!

On the second day, they gave him the medicine and left. The goat came back and said:
– Come on buddy, get up or else you’re going to die! Come on, I’ll help you get up.
Let’s go! One, two, three…

On the third day, they came to give him the medicine and the vet said:
– Unfortunately, we’re going to have to put him down tomorrow. Otherwise, the virus might spread and infect the other horses. After they left, the goat approached the horse and said:
– Listen pal, it’s now or never! Get up, come on! Have courage! Come on! Get up! Get up!
That’s it, slowly! Great! Come on, one, two, three… Good, good. Now faster, come on…… Fantastic! Run, run more! Yes! Yay! Yes! You did it, you’re a champion!!!

All of a sudden, the owner came back, saw the horse running in the field and began shouting:
– It’s a miracle! My horse is cured. We must have a grand** **party. Let’s kill the goat!!!!*
***
The Lesson:* this often happens in the workplace & life in general . Nobody truly knows which employee or people actually deserves the merit of success & are in fact contributing towards success , or who’s actually contributing the necessary support to make things happen. Be grateful.
Remember………
*LEARNING TO LIVE WITHOUT RECOGNITION IS A SKILL!!!!*
If anyone ever tells you that your work is unprofessional, remember:
Amateurs built the Ark [which saved all the species]
and
professionals built the Titanic [all died tragically]

15 Replies to “Nice short story with lesson ;Learning to live without recognition”